Five Dysfunctions of a Team: Commitment 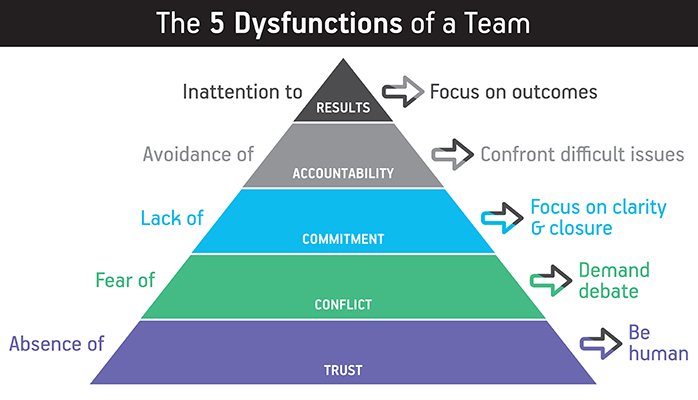 This will be part of a 5-part series about the five common dysfunctions of a team to create more awareness on common issues and explore potential solutions. In case you’re not familiar with the framework, this book was written by Patrick Lencioni, founder and president of The Table Group (a firm that has been helping leaders improve their organizational health since 1997). This framework has stood the test of time and highlights important learnings for leaders in the workplace now more than ever.

The third pillar of the 5 dysfunctions is Lack of Commitment at work.

A desire for consensus can significantly delay decisions and create paralysis in the team. The solution is not to lead with a dictatorial approach where the top person makes all the calls. Instead, it’s about finding a way that while all members of the team may not get their way, they have been heard and considered and acknowledged. If the group has trouble making a decision, then the leader can make the call without worrying about upsetting anyone. In a high-performing team, everyone is heard and willing to rally around the final decision. There is ultimate buy-in from the team in the end.

The need for certainty can also be paralyzing to a team. A high-performing team is able to stand behind a decision and be committed to the path despite not having all the information. If they happen to take the wrong path, they are able to boldly change direction rather than waver. In dysfunctional teams, decisions get delayed until there is an overload of data and information to drive more confidence. When taken too long, it generates a lack of confidence within the team in their ability to make decisions.

Here’s How Lack of Commitment at Work Can Feel:

Ways to Improve Lack of Commitment: